In the middle of the night,
Miss Clavel turned on the light
and said, “Something is not right.”
And afraid of a disaster,
Miss Clavel ran fast and faster. 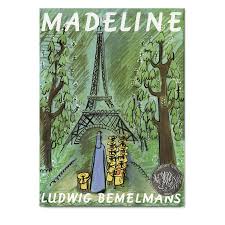 I read children’s classic, Madeline, at Cael’s insistence more than a dozen times last week.  Until Cael was overcome with fear.

“Mommy, I do not wike it anymore.” Cael said.  “Pwease do not weed Mad-ah-wine again.”

“But you love it.” I protested.  Besides,  I identify with Mad-ah-wine’s firm sense of self, and I think Miss Clavel rocks.

And it’s true.  Cael can hardly take the suspense.  He holds his breath every time Miss Clavel runs fast and faster.   The fact that he knows how the story ends, with Mad-ah-wine’s safe recovery from appendix surgery, makes no nevermind in his head.

Cael feels the terror of Miss Clavel’s run, over and over.

If you’re his twin brother, Cai, then being 4 years old should come with a No Fear t-shirt, a stunt plane, and a free, lifetime supply of bone splints.

The part of Mad-ah-wine’s story with which Cai most strongly identifies is:

And she said, “Please children do —
tell me what is troubling you?”
And all the little girls cried, “Boohoo!
We want to have our appendix out, too!”

Because Cai really, really misses being at the hospital.  The fruitcake.

But I get Cael’s fears.  I really do.  I can’t tell you how many times, in the day or night, I’ve been afraid of a disaster, and I’ve run fast and faster.  To my kids’ rooms to check their breathing.  To the backyard when I hear painful cries.  To the toilet bowl when a child is stuck inside it.

Only, this weekend, when we had a minor disaster, I was too far away to run to my son fast, much less faster.

Abby had a dance competition about an hour away from home in the big city.

So I was an hour away when I got the call from Greg.

Which is our family code.  I knew the instant the word “OK” left Greg’s mouth that someone was at the hospital.

That’s the rule.  If the situation isn’t life threatening, you have GOT to start the conversation by saying so.  Because nothing’s worse than a convo that starts with, “I’m at the hospital.  There was an accident…” and continues as a rambling mess… before the person calling finally says, “But it’s OK, everyone’s fine.”  I go from stricken and breathless to an **exploding exhale!** to a tiny little increase in vocal volume followed by the words, “WHY DIDN’T YOU SAY SO IN THE FIRST PLACE?”

And, even though I knew Cai would be OK, my stomach fell.  My baby was hurt, and I was away.

I asked Greg if he was sure about the stitches.  Greg replied admiringly, “Oh-ho YEAH.  Does he NEED stitches!”

(Um.  Note to husbands:  I realize — I do — that there’s no winning way to call your wife and tell her that your son needs stitches.  But might I oh-so-gently suggest that, if your wife asks if you’re sure, you reply with something calm and mild, like, maybe, “Well, I think he does.  And I figure, better safe than sorry, so I’m taking him in.”  Reassuring and less dire.  Less dire is good.  Just saying.  To no husband in particular.)

When the call ended, I sat for a while.

Pieces of my heart were all over.  One piece was dancing on a stage with glittery eyelashes and a sequined dress.  Three pieces were at home with my cousin.  (Thanks, Nathan!)  And one little 34-pound piece was in the emergency room getting a zipper added to his forehead.

I considered jumping dance competition ship and racing to the hospital, but I also knew it was important for Cai to let his daddy be the hero.  This Mommy too often wrests the care-giving reins from Daddy’s hands.

But I questioned.  I agonized.  I wondered if I was doing the right thing.  I texted Greg:

So when I got home and saw my baby, I told him I was sorry I wasn’t there.

I hugged him, and answered, “Because I love you, and I’m sorry you were hurt.”

“You were afwaid I was hurt?” said Cai.

“I was sad you were already hurt, Cai Cai.” I clarified.

See how indispensable I am?  Poor baby, without his mama.

“I’m still sorry I wasn’t there, Cai.  No more trips to the hospital for a while, OK?”

Cai looked at me like I’d lost my mind, and he furrowed his brow at me.  Then he sighed in resignation, rolled his eyes, and said, “OK, Mom.  I guess.”

So that was anxiety well spent.

But here’s the thing about being a mom.

Because, no matter the kid, no matter my location, no matter whether I get it right or screw it up six ways to Sunday… in the end, I am Miss Clavel.

And when I sense a disaster, I will always ache to run.

ABOUT BETH WOOLSEY I'm a writer. And a mess. And mouthy, brave, and strong. I believe we all belong to each other. I believe in the long way 'round. And I believe, always, in grace in the grime and wonder in the wild of a life lived off course from what was, once, a perfectly good plan.

On Conjuring Energy From Nothing…Because Of Course. And Always.

There’s a Dead Bird in My Bed: The COVID Diaries

Sorry Our Kids Left Their Beer Bong on the Porch

This site uses Akismet to reduce spam. Learn how your comment data is processed.

20 Things Every Parent Should Hear

TO MAKE YOU LAUGH

ON BEING A MOM

On Being a Time Traveler My Body: Sacred & Scarred Radical Acts of Self Care The Evolution of My Cape On Being a Mombie Down & Halfway Up On Adoption & the Real Mom On Not Doing All the Things On Rejecting Balance On Leading From Behind

ON FINDING A VILLAGE

For New Moms:
How to Wave in the Dark We Do Train Wrecks Here The Importance of Mud Holding Hands in the Dark On Working Tirefully

My Confession About Faith On Faith & Parenting: When God Fell Out of the Box Why I Quit "Loving the Sinner" The Real Reason I Go to Church Sanctuary On Grace, Waves & Rocks Why I'm an LGBTQ Ally