Waving in the dark, friends. And in the light. It’s 12:52am at home and 9:47am where I’m typing this from the Brussels airport, ready to board my flight to Uganda in a few minutes. Light and dark, chasing each other across the world, and I feel like I have a foot in both at the moment.

I’ll try … try, try, try … to write periodically while there. We’ll see how the internet holds up. I’m eager to meet our refugee momrades and to sit with them in the dark, in the name of all of us, and in the name of Love. To hold hands. To live in the mud. To see magic there. Stay tuned, friends. I’m holding you close in my heart while I’m there.

In the meantime, I’m late (because OF COURSE I AM) in telling you our January “A Likely Story” Book Club selection. This one comes suggested to us by one of my favorite librarians, Korie Buerkle, who has, for several months now, been reading books with protaganists who are not white. The book below is an epic YA fantasy, and is the first book of a series, only two of which have been written to date. I must say, I’m about a third of the way through it and am enamored already.

And see you on the flip side. 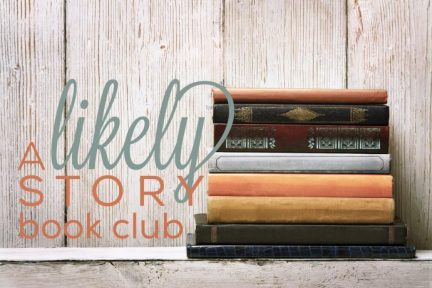 An Ember in the Ashes
by Sabaa Tahir

Laia is a slave. Elias is a soldier. Neither is free.

Under the Martial Empire, defiance is met with death. Those who do not vow their blood and bodies to the Emperor risk the execution of their loved ones and the destruction of all they hold dear.

It is in this brutal world, inspired by ancient Rome, that Laia lives with her grandparents and older brother. The family ekes out an existence in the Empire’s impoverished backstreets. They do not challenge the Empire. They’ve seen what happens to those who do.

But when Laia’s brother is arrested for treason, Laia is forced to make a decision. In exchange for help from rebels who promise to rescue her brother, she will risk her life to spy for them from within the Empire’s greatest military academy.

There, Laia meets Elias, the school’s finest soldier—and secretly, its most unwilling. Elias wants only to be free of the tyranny he’s being trained to enforce. He and Laia will soon realize that their destinies are intertwined—and that their choices will change the fate of the Empire itself.

“Sabaa Tahir grew up in California’s Mojave Desert at her family’s eighteen-room motel. There, she spent her time devouring fantasy novels, raiding her brother’s comic book stash, and playing guitar badly. She began writing An Ember in the Ashes while working nights as a newspaper editor. She likes thunderous indie rock, garish socks, and all things nerd. Sabaa currently lives in the San Francisco Bay Area with her family.”

And here’s a review of The Stupidest Angel: A Heartwarming Tale of Christmas Terror by Christopher Moore, our December book club book.

On a scale of 1-5 (1 being the worst, most heinous book in the history of the world, and 5 being I WILL FORCE EVERYONE I KNOW TO READ THIS) we rated The Stupidest Angel a 3.1. You’ll note the rating scale is a little harsh. It’s, like, practically impossible for anyone to rate a 5. Like that annoying college professor who thought awarding me an A+ meant I actually had to EXCEED expectations for my specific work according to the parameters set out in the syllabus instead of to do just fine and be generally smart as a person which was the system I preferred. So I guess I feel the need to point out a 3.1 is a solid C grade for this book, which is a C, and, as I told my college daughter when she brought home her first semester grades, C’s GET DEGREES! GOOD JOB, BABY!

Terry FischerWolfe: I loved it. It reminded me of another of my favorite authors, Tom Robbins. Quirky books have always been a favorite of mine. I give it a solid 4.

Alissa Cowan Norman: I loved it. My husband was entertained when I picked it back up after a couple days and said “Gotta see if the zombies eat everyone now…”. The language didn’t bother me at all, and I already recommended it to my MIL, so… I give it a 4.

Diane Bognar: I read maybe half of it and then returned it to the library. Couldn’t get into it at all. The part I read would be rated a 1.5.

Sarah Kessler: I read it and really enjoyed the writing style! That said, I would give it a 3.5 for the language and some of the content which I just felt was unnecessarily vulgar. Highly entertaining tho and very funny

This site uses Akismet to reduce spam. Learn how your comment data is processed.